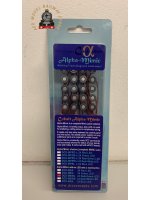 The easiest panel wiring you will ever do!

Alpha Mimic is totally plug-and-play with everything linked by easy to use connectors except the DCC Accessory Bus wires, and they use a simple screwdriver connection!

We provide a simple linking cable with every Alpha Mimic so you can daisy-chain together as many as you need and even the optional extension display cable just plugs in!

LEDs can add lots of work on DIY panels, but we focussed on keeping it easy so our specially designed Green, Red, Blue, Red-White and Red-Green LEDs are also mounted on 240mm plug-in leads.

Even extending them or adding multiple LEDs doesn’t complicate life as the extension packs that contain additional matching LEDs also include both single and 6-way adapters, so from start to finish, you will never have to cut or solder anything!

This pack contains sufficient LEDs and terminals to show the position of 12 turnouts. More can be added by combining packs – if you wish to have additional LEDs to show a route, then use the Alpha Mimic Add-On LEDs + leads